For weeks now the northern Bahamas has been battered by cold front after cold front, with high winds, plunging temperatures and flurries of rain to make life, maybe not miserable, but perhaps a tad tedious. So Saturday the 22nd of January dawned as something of a surprise, flat seas, clear blue skies and a warm and welcome sun.

Like a flight of butterflies yachts took off in all directions over the Sea of Abaco to make the most of the break, and I followed suit. My first stop was at Man o War Cay to drop off the genoa that I had ripped a few days earlier. Jay, the sail maker, is a charming fellow and great conversationalist, so it was almost an hour later that I got back to the boat and headed north west towards the tip of Great Guana and Bakers Bay. I had passed the place on my way down but had been too busy getting to Marsh Harbour at that time to stop, but this time I was there to explore. As I neared the bay I noticed a small power boat stationary in the water and closer inspection revealed a pod of slow moving dolphins gamboling round the boat. They were not the least bit alarmed by the boat’s proximity and seemed to enjoy the company of humans at close range. I tried to get photographs but none came out that are worthy of showing. 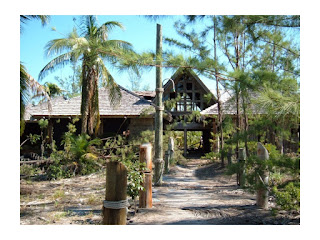 There were only two other boats anchored in the bay, and dropping my anchor in ten feet of water I jumped in the dinghy and headed for the shore. The sand has a definite pink colour to it with palms and casuarinas obscuring what lay behind. About 14 years ago a cruise ship company (Disney) decided to create a stop over here for their passengers, the idea being that the ship would come in behind the reef, deposit the tourists on this beautiful beach and entertain them with shows, dining and drinking. The place was to have a Treasure Island theme. To this end a complete facility was built in timber, shipped to the Abacos and erected in Bakers Bay.

Unfortunately the idea was a failure. The big ships found it difficult to maneuver in the confines of the shallow bay and eventually one ran aground. Following this the place was abandoned and for the last nine years it has been left to the depredations of the weather and the odd looter. And yet many of the buildings still stand, mute testimony to the effort that this investment represented. 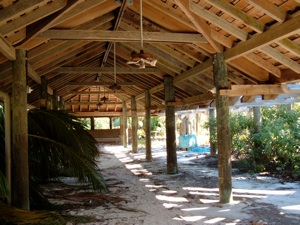 There is an open-air theatre, restaurants, bars, dance floors, kitchens, staff housing, and none of this is built in cheap timber. In fact most of it is western red cedar, still in perfect condition, some of it looking as if it were milled yesterday. Palms were planted, walkways established, generators brought in, a complete electrical distribution system installed, fresh water tanks built and a host of other ancillary systems brought on line. And then it was left to rot.

Now a new developer is looking at the site and has said that the buildings will be bulldozed and burnt. What a waste. I reckon there is at least enough good timber in the place to build a dozen big houses. 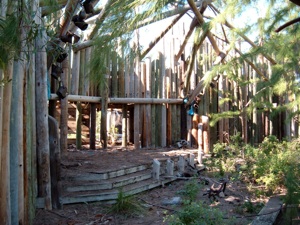 Lazy Days is a Morgan 512, built in 1982. She is 51 feet overall with a beam of 15 feet and draws 5 and half feet. This means she is ideal for Bahamas cruising where so much of the water is shallow. The layout is as follows:

The aft cabin has a huge bed, hanging locker, storage drawers and en suite head and shower. There is also a great deal of shelf space. A large hatch is in the center of the deck head and the cabin has six portholes.

Forward of the aft cabin there is a passageway that has access to the engine room to port and a large chart table to starboard.

Forward again is the main salon with dinette to starboard, galley to port and forward again two settee seats with TV, DVD and VHS player.

Forward again is another head on the starboard side and then the forward cabin with two single bunks.

From the salon a large hatch leads up to the deck, which is protected in hot weather by a big Bimini sunshade. 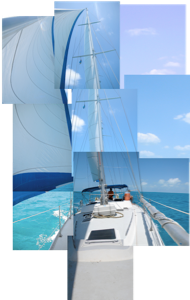 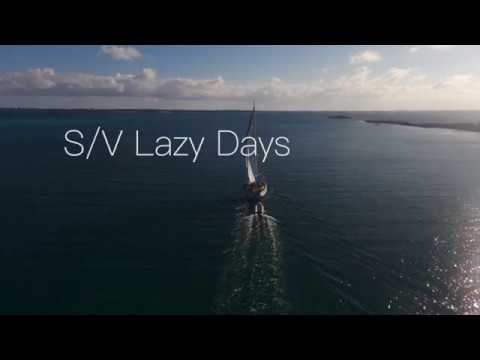